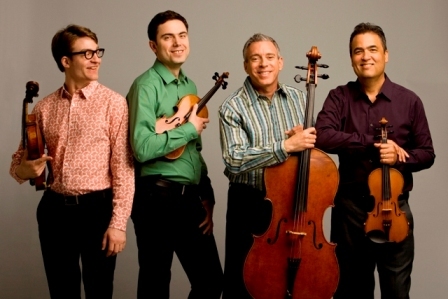 Its name derived from creation mythology found in Native American Folklore, the Turtle Island Quartet, since its inception in 1985, has been a singular force in the creation of bold, new trends in chamber music for strings. Winner of the 2006 and most recently, the 2008 Grammy Award for Best Classical Crossover Album, Turtle Island fuses the classical quartet esthetic with contemporary American musical styles, and by devising a performance practice that honors both, the state of the art has inevitably been redefined. Cellist nonpareil Yo-Yo Ma has proclaimed TIQ to be “a unified voice that truly breaks new ground – authentic and passionate – a reflection of some of the most creative music-making today.”  turtleislandquartet.com